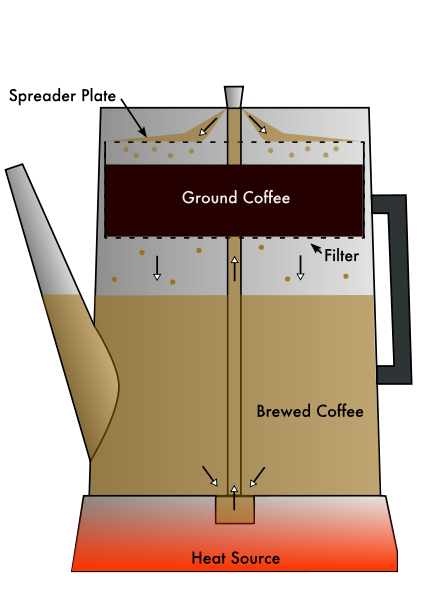 I woke up refreshed this morning after a surprisingly good night’s rest. I say surprising because I did not sleep in my own bed but slept on a roll out couch at my mom’s condo. Most people do not sleep well out of their routine and I am no exception.

Thankfully though I am up, clear headed, at the laptop with a cup of coffee at hand. All routine except the coffee was brewed, extracted and produced using a percolator. See the above image.

I must say the coffee it made isn’t bad. Then again, I am over two decades removed from Starbucks induced coffee snobbery. I left that behind when changing diapers became more of a priority than cleaning the grinds out of a French Press pot. Come to think of it, started at Starbucks in 1990 so I have three decades of perspective to write about Starbucks. What makes my viewpoint unique is that Starbucks will always be that small, unknown company, which was a big part of my life for four years. Not the global giant company which is a quick trip there and back for the rest of the planet. A good reason as any to read Tripio, I think. Speaking of which….

In Tripio, Jay and Kati take a train trip from Chicago to Charleston, IL to meet Kati’s parents. Kati wants to “convert her parents to Cosmodemonic coffee but they still have an old percolator”, meaning that it will be tough to get these older folks who use a percolator, to like the Full-City roast used by Kati and Jay’s employer. Could you search “Full City Roast” on your phone for me? I’m not sure it that term is used anymore. Thanks.

Now back to me. My daughter and I drove two hours yesterday to visit my mom. As luck would have it, there was Starbucks about half way there, so we stopped. That was yesterday. Tripio takes place in 1992 when there were only Starbucks locations in the Pacific Northwest and Chicago. It was not possible for Jay and Kati to stop at Starbucks once they left Chicago. They had to bring the coffee with them. I know that is hard to believe these days when having a Starbucks on the way to almost anywhere is not just a hope or wish but an expectation, no matter how long or short the trip.

Early in Tripio, Jay is taking a shorter trip, this time he is leaving his Starbucks after a shift and taking the bus home. He notes that “it was becoming a common occurrence for the other passengers sitting near me to look around to identify the source of the coffee smell”. Jay does not like to wear his uniform on the way home and as such does not volunteer that he is the one who reeks of coffee. Jay usually had had enough of coffee for the day and preferred to spend the bus trip back to his apartment with “a book to read or my current journal“

In the early 90s when I took any trip to anywhere from Chicago I always brought Starbucks, whole bean or ground, as a gift to my host. Weeks before the trip I would begin to accumulate the stash using my free ½ pound of marked out coffee we received each week. I would collect small amounts of  an expired varietal in advance of the trip and freeze them until I was ready to take off. I would also ask a fellow barista if I could use their mark out for the week. Sometimes the suitcase I traveled with had more bags of coffee than articles of clothing. I fancied myself as the “Johnny Appleseed of good coffee” spreading seeds of wonderful Full City roast Starbucks coffee across the land.

Those 30 years have passed since I planted those seeds of coffee across the land.  I wonder if one of the seeds grew the Starbucks my daughter and I stopped at yesterday?

May I help who’s next?